From Jungles to Suburbia, Brazil has it all and then some……
Can you imagine what Brazil is all about? When you say the word BRAZIL in conversation with people, they automatically mention either Carnival or the Amazon. Both of these are infamous Brazillian topics. But there is so much more to Brazil than the dancing in the streets and the wild jungle.

If you were arriving in Rio de Janeirio, you would be overcome by the huge statue of Jesus, holding out his arms to embrace the whole world. It is a marvelous site and one that you just can’t walk away from without some feelings of awe!

The Open Arms of Jesus in Rio de Janerio

We are very close to the beginnings of the 2016 Summer Olympics that will be held in Brazil. Have you made your travel plans yet? Do you have your travel guide? You will need one for sure. Brazil is a huge country with many millions of people in the major cities. There is so much to do and see on a regular basis, but with the Olympics happening this year, there will be even more to do and see.

Brazil what would you like to know?
Brazil is a country made up of many different peoples from the native peoples in the Amazon Basin to the Portuguese immigrants that conquered the land, to the German, Swiss, Chinese, Japanese who emigrated to this country over the last 400 years or more. It would be great to learn something more about this country before you come for a visit. The Brazil Reader will give you that background information and teach you something of the country and it’s people, resourses, government and more.

From the Amazon to the tip of South America (almost)
Brazil is one of the world’s most diverse geographical areas. It is full of natural resourses and has a plant base that cannot be found in too many other countries. Brazil can be very flat in places, mountainous in other places and a verdant green in the north. It has over 5,000 miles of ocean front property and is home to some of the most unique and extraordinary plant and animal life.

I can remember visiting the Botanical Gardens in Rio and seeing one of the curators walking around with a huge bamboo pole swatting at the trees. When I asked what he was doing, he smiled and said, ” I’m making sure that the monkeys don’t poop on your heads!” Now having lived most of my life in Canada, I found this hilarious, as I would never have thought about the natural occuring wildlife making themselves a nuisance quite like that. I digress, sorry!

The population of the country is broken down into 4 major groups. Almost half are white, almost half are brown, 7% are black, 1% are oriental and less than 1% are native Brazillians.

Brazil is the only country that sits on the equator and still has continuous land masses on both sides of it.

Brazil is a tropical to semi-tropical country with 8 major rivers that all lead out to the Atlantic Ocean.
The most famous of these rivers is the Amazon, with the second one being the Iguacua, where the famous Iguacua falls are located.

Mountains, flatlands, and jungle, it’s all here in Brazil.

While many people think that Rio de Janerio is the capital of Brazil, that is not the case. Brasilia is the capital city of this large country. Sao Paulo is the banking and business center and Rio is the Playground.

Brazil has a diverse and wonderfully eclectic mix of people who now call it home. There are many enclaves of different nationalities and sometimes you may think you are walking into another country altogether. There is a large German population that came to Brazil when they fled Germany before the Second World War. Because of the Portuguese influences, they felt right at home and have contributed to making Brazil a melting pot of different people, all pleased to call Brazil, “home.”

My parents arrived in Brazil in 1954 and while there, my sister and I were born. So I am a Brazillian by birth, Swiss by my heritage and now Canadian by choice. But I digress again! (sorry)

The people of Brazil, are warm hearted, fun loving and artistic. I was amazed by the amount of “art” available in all the public squares and open areas. It seemed to me that every corner had something interesting that was made by some aspiring artist and some really famous ones.

The turnpikes on the highways are literal “art collections” and it is colourful and wonderful!

Artistic buildings are the norm, nothing is just square.

Art is in the buildings and the surroundings, you can’t go anywhere without a touch of some imagination happening in the country. Picture is the Brasilia Cathedral taken from wikipedia.

Get ready, it’s coming, the whole country will be excited! Soccer is the game of choice for everyone. You will find every kid playing somewhere, in the streets, at school, at the parks. Long live Soccer.

In Brazil every kid starts playing street football very early. It’s in our blood. Ronaldo
Brazil, what you need to know and where to find it.
From Scientific to Natural Resourses and Tourism, you can expand your knowledge here.

Wikipedia’s Guide to Brazil
Brazil – Wikipedia, the free encyclopedia
A really good overview of Brazil, the history, geography, politics and everything else.
Amazon rainforest – Wikipedia, the free encyclopedia
Rainforest information about all aspects of this ecological wonder.
Brazil Attractions – Amazon, Iguassu Falls, Rio de Janeiro, San Paulo
Brazil Attractions. Find information and virtual tours of the best attractions in Brazil including the Amazon and Rio de Janeiro.
Brazilian Animals – Animals of Brazil: Fauna Brasileira
Links for kids to learn more about the Birds of Brazil.

Official website of Rio 2016 Olympic and Paralympic Games. News, photos, videos, information about sports and facilities, everything about the host city and much more.

Will be the venue for Beach Volleyball and you can believe that it will be a wonderful venue too! This is a beach that is known the world over for it’s beauty and the amazing rock formations that come out of the water. The Sugar Loaf Mountain and the Beautiful Christ. Pictures just don’t do the area justice, you need to see them for yourself.

The countdown has already ended!

2016 Olympics in Rio de Janeirio: August 5, 2015
Just to give you a little taste of what is to come, enjoy some of these videos!
If you aren’t Brazillian yet, you just might need a “Rio” transfusion!
Sports and competition can we say, “Go to Brazil in 2016!” all in one united voice?

Just a little something to whet your appetite for sports and travel.

The whole world will enjoy the sights and sounds of Rio in 2016!

Connect with the rest of the world in Rio just a few short years from now!

Plan early and make your dream of coming to Rio come true! 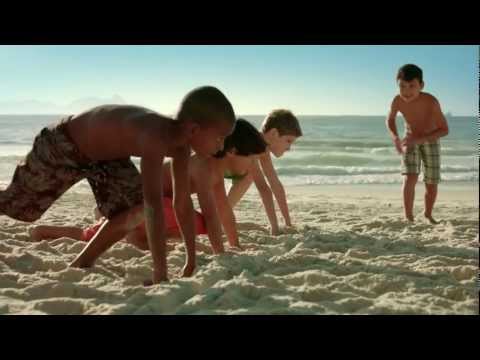 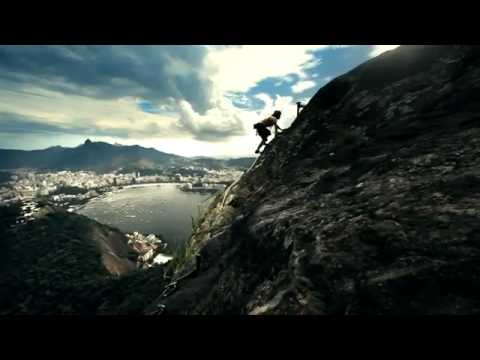 Just a little something to whet your appetite for sports and travel. 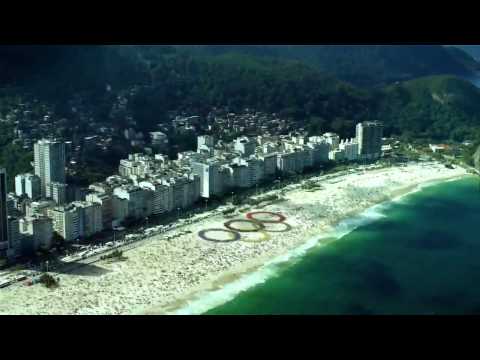 The whole world will enjoy the sights and sounds of Rio in 2016! 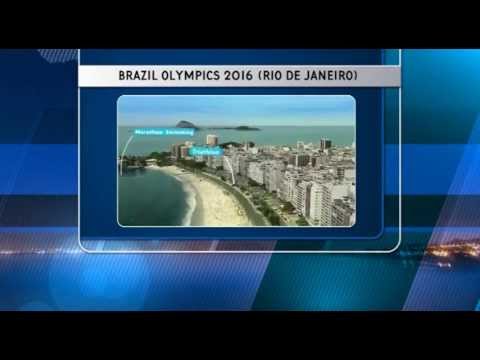 Connect with the rest of the world in Rio just a few short years from now!

Plan early and make your dream of coming to Rio come true!
It will be the site of the Summer Olympics in 2016!
It’s time now to start preparing for your trip to Rio!

Get your Brazil Tour Book out and start marking out the things that you really want to go and see! And there is lots to see!

Rio is one of the most beautiful cities in the world and it will be decked out with extra special care for the Olympics. If there is one thing that Brazillian’s love, it’s sharing their country with the world. What better venue can you have for that, than the Olympics? When the world’s eyes will be focused on the beauty and the events as well. Rest assured, Brazil will put on a show that no one will soon forget!
Many of us in the Northern Hemisphere don’t realize that there is a whole different world just under us in the South. But the eyes of the world will be on Brazil in the next few years. Soccer is a passion in Brazil like football or baseball is here in the North. FIFA (Federation of International Football Association) has hosted Brazilian teams before on the world stage. Can anyone forget “Pele”, who helped Soccer become a household name?

The Olympics will also help to focus the world on Brazil. For the people of the country this is really good news as there will be jobs for them to do and the economy will imporve again. It will also help the world to recognize the possibilities in architecture, arts, music, and beauty.

The Links List is chock full of information, please do check out those links if you want to know more.
Brazil a Resource
Everything you need to know for a great time in Brazil
With less than a year to go till the Fifa World Cup in 2014 and a few years till the Olympics in 2016, now is a great time to start saving for the trip of a lifetime.
Add this to your lens
Do you like what you’ve seen so far?
Love Brazil, right here, right now!

Have you ever been to Brazil? What were your thoughts? Would you go back again?
Oh, I would love to hear your thoughts. This country has a special spot in my heart, how about YOU?

This site uses Akismet to reduce spam. Learn how your comment data is processed.

Do You Want to Learn How to Blog (The Right Way)?

Olivia Morris (Grammie Olivia) is an affiliate member of Shareasale and Rakuten Affiliate Networks. Commissions are generated when you click on links contained within these articles.

Olivia Morris a participant in the Amazon Services LLC Associates Program, an affiliate advertising program designed to provide a means for this site to earn advertising fees by advertising and linking to amazon.com

Where products have been received for review, full disclosure will be made to that effect.

We are in compliance with the requirements of COPPA (Childrens Online Privacy Policy Protection Act), we do not collect any information from anyone under 13 years of age. Our website, products and services are all directed to people who are least 13 years old or older.”

We will NOT publish nudity or profanity.

Unless you sign up for our newsletters, email addresses are not collected. We will not spam our users.

Make Your Shopping Pay You a Bonus!