I’d like to take a few moments to do a check list of all the things that I have learned over the last year and what plans I have for the year to come……..

That’s a tall order for anyone, but I think it makes a lot of sense!

At the end of 2015, when you are settled into a nice warm place, maybe there’s a nice fire burning in the fireplace and some soft music playing, you’ve visited with friends and family, shared gifts, traveled back in time to relive some great memories, but now it’s time to unwind just a bit. It’s a great time to take stock of everything that has happened in the past year and quietly make plans for 2016.

Now none of us are guaranteed a 2016, but assuming that everything remains as normal as possible, the chances are pretty good that we will have a date with a new year and it will be coming soon!

So what did you learn in 2015 and what will you continue to do in 2016?  These are the questions that need answering.

Personally, I have put much more into my blogs and my writing in general than I had ever done before.  I started writing at Squidoo, then moved to Hubpages and now I am out here on my own, doing my own writing.  I learned a lot from the two other groups I had been writing for and realized that I could do my own thing much better.

When I started writing, it was for my own sake, I needed to get a lot of “stuff” out of my head, so writing about these things became cathartic.  As I learned more and more, I also found that I could make some spare money doing what had become a type of therapy for me.  So I entered the affiliate market.

Now 2015 has taught me that I need to learn how to do this affiliate marketing properly in order to maximize the income potential.  I would like to eventually stop working outside the home and keep myself occupied with product reviews, that are honest and straightforward.

My friends Robin and Lesley are showing me the road to success with doing this type of marketing and you can too!

I signed up for their courses at Pajama Affiliates and have learned so much more about how to write a successful blog post, how to  review and market items so that they are seen and will make sales too.

Amazon Associates Masterclass
These two courses are full of invaluable information and will make your transition into affiliate marketing a success, by following their proven methods.

You can do it too!

Here’s hoping that you will join me in making 2016 one memorable year to come!  Happy New Year.

This site uses Akismet to reduce spam. Learn how your comment data is processed.

Do You Want to Learn How to Blog (The Right Way)? 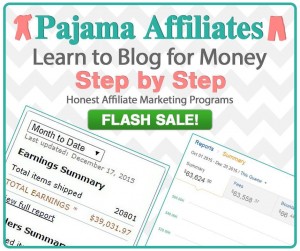 Olivia Morris (Grammie Olivia) is an affiliate member of Shareasale and Rakuten Affiliate Networks. Commissions are generated when you click on links contained within these articles.

Olivia Morris a participant in the Amazon Services LLC Associates Program, an affiliate advertising program designed to provide a means for this site to earn advertising fees by advertising and linking to amazon.com

Where products have been received for review, full disclosure will be made to that effect.

We are in compliance with the requirements of COPPA (Childrens Online Privacy Policy Protection Act), we do not collect any information from anyone under 13 years of age. Our website, products and services are all directed to people who are least 13 years old or older.”

We will NOT publish nudity or profanity.

Unless you sign up for our newsletters, email addresses are not collected. We will not spam our users.

Make Your Shopping Pay You a Bonus!